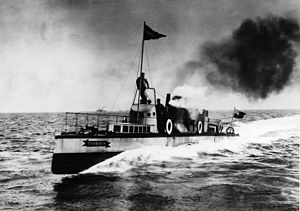 The world’s fastest water vessels down through the years is an interesting history of man’s never ending quest of constantly trying to be better and to do better.The earliest recognized record holders before 1910 were all steam powered vessels using boat propellers for propulsion. The first gasoline powered craft to take the water speed record did not come along until the year 1911.

In 1885 Nathaneal Herreshoff’s  94 foot yacht then sold to the US navy as a re-fitted torpedo boat “Stiletto” held the record with a top speed of 26.2 mph. In 1893, it is believed that William Cogswell’s seventy nine foot yacht “Feiseen” achieved the top speed of 31.6 mph to hold the record. Charles Parson invented the first steam powered turbine in 1894 and soon held the record in 1897 with his 104 foot ship called the Turbinia with a maximum speed of 39.1 mph. Amazingly this ship still exists and is a museum display in Britain. In 1903 Charles Flint held the record with his navel designed 130 foot long twin boat prop torpedo boat named the “Arrow” with a top speed of 45.06 mph. Mr. Flint is also known for founding the company “Computing-Tabulating-Recording Company” that later became a company called IBM.

If you are looking for a little more speed out of your watercraft check out our website and call us at 1-800-573-5533 for advice on what boat propellers improve your speed.