Fastest Boats on Water – Will a New Record be Set Soon? 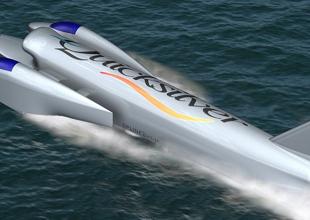 Posted by Dan's Discount Propellersadmin on May 2, 2016 in Boating, Buy Boat Propellers | 0 comments

Powered by a jet engine using air thrust like a plane for propulsion instead of a watercraft using shiny new boat props, the fastest water speed record is 317MPH and is held by Ken Warby. Originally from Australia Ken now lives in the USA. It was set in 1978! Thirty six years ago.

It is just not possible to hook up the thousands of pounds of jet thrust to drive shafts and boat props.

The fastest water speed record is 317MPH and is held by Ken Warby originally from Australia who now lives in the USA. It was set in 1978! Thirty six years ago.

Why has the speed record not been broken in all this time? There have been a few attempts made but with an 85% fatality rate in these attempts, people are not exactly falling all over themselves in trying to beat the record. The reason being is boats at these high speeds can become very unstable with very little effort. They can have the air catch underneath them and become airborne which never ends well at over two or three hundred miles an hour, or they can nose dive into the water, that is like hitting a brick wall because water can be as hard as a solid at over one hundred miles an hour. Another not so good thing. It has come down to needing to build a boat with tremendous power to achieve great speeds but with a hull and structure design that will stick to the water with total unwavering stability.

Warby and his son David are working on a new boat that will be driven by David and should be ready soon. They claim it will easily go faster than the 317 MPH mark but concede that is an extremely dangerous venture because of the new design.

Another serious contender for breaking the speed record is Nigel Macknight of The UK. He has been working on a forty foot long boat design and build for over twenty five years and is getting close to a run at the record. There are a few other people and groups that are working on projects to beat the record. An American group is going to try to beat the record with a boat that will be driven by Russ Wicks who holds the new boat props driven craft world record with a speed of 205 MPH. Another Aussie Colin Johns is building a boat. New Zealand’s Tony Millitt will have a run at it in 2016. A Belgian challenger Daniel Dehaemers is testing his boat this year and will try to beat the record also. So it looks like there are at least a half a dozen serious contenders who are getting close to trying for a new record. We will see what happens soon hopefully.

With a new boating season starting up now, if you need new boat props or a spare propeller, please check out our boat propellers offered at huge discounts or call us at 1-800-573-5533 for a recommendation on the new best props for your boat.