Solas Boat Propellers Founded in 1985, SOLAS is now one of the most well known and trusted names in outboard and stern drive propellers. SOLAS' success is largely due to superior propeller design and craftsmanship.

High Precision Design All SOLAS propellers are developed through a state of the art process. Using theoretical calculations, geometry design, modern CAD technologies, prototype testing, pilot production and field tests, SOLAS props are designed to be superior to other propellers.

#1 Ranked Propeller Numerous tests conducted by major media authorities have proven that SOLAS propellers stand up to collisions better than the competitors'. Long term durability studies have shown that SOLAS propellers' resistance against corrosion outperforms all others in their class.

Order On-Line or by Phone 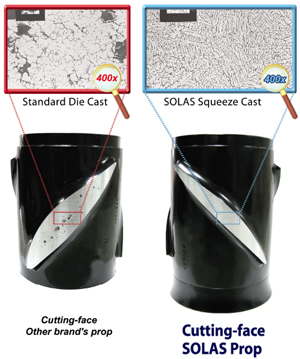 These Solas aluminum and stainless steel propellers are ONE PIECE PROPS that have the rubber cushioned hub already installed by the factory. No separate hub kit to deal with or to buy.Just use your existing thrust washer (It's the big washer that goes on before the propeller) put the prop on, then use your existing spacers and attaching hardware to secure it on to the propeller shaft. Simple.