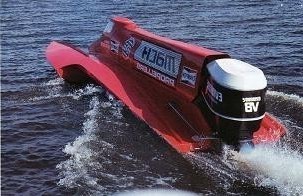 Posted by Dan's Discount Propellersadmin on May 23, 2016 in Boat Propellers, Boating | 0 comments

Mach Performance from the USA , who made great performance boat propellers at the time, holds the world record for having the fastest outboard engine powered boat. The driver of the boat was Bob Wartinger . The two pass average speed was 176.556 miles per hour. Using a 3.5 litre V-8 Evinrude outboard motor mounted on a hydroplane style boat hull made by Karelsen, the record was set on November 30th. 1989 on the Colorado River. The high performance boat propeller used was designed and produced by Mach performance. Instead of using the one piece casting method they were famous for being the only major boat prop maker that welded the blades onto the barrel part or the propeller. They are no longer in business probably because of too many problems with their boat props like blades breaking off from impacts or even sometimes just under normal operation. They did make great performing boat propellers most of the time. The propeller they came up with for the speed record was a solid hub three bladed cleaver style stainless steel boat prop that is common on racing boats but the pitch size used was without a doubt extreme. The V-8 Evinrude was worked on to get the maximum horsepower and they were able to get well over 425 HP out of it. Then they added a Nitrous oxide system to it that put way over 600 Hp. All that power was attached  to a one of a kind overdrive lower unit that was designed and made for only one purpose, to stay together at the highest possible speed.

It is hard to imagine that this record along with the fastest boat powered by anything record set in 1978 at 317+ MPH are both still standing. There are rumors that attempts to break these records are believed to be real and should take place soon.

For super discounts on all performance boat propellers shop on our site or call us at 1-800-573-5533 for pricing.