Japanese outboard motors. Honda, Suzuki, Tohatsu/Nissan and Yamaha are the Japanese companies that manufacture outboard motors. They all started out making other motorized things including motorcycles and got into outboards in the 1950’s and 60’s and they all are still in business today.The boat propellers used on these early engines were all made out of aluminum and mostly 2 bladed boat props. 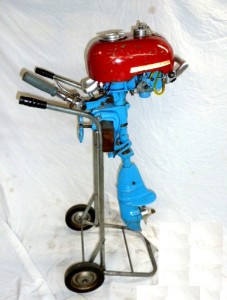 It is believed that the first outboard produced by a Japanese company was a Tohatsu 1.5 horsepower air cooled 2 stroke model named the OB-2 that came out in 1956 and was used primarily by Japanese fisherman. Today  Tohatsu is the second leading manufacturer of outboards in the world.

Yamaha started work on the development of their first outboard engine in 1958 with an engineering staff of two people. Starting from scratch, the research was done by making prototypes and running them until they broke down then they would improve on the parts that broke. Their first production model came out in 1960, it was the P-7, a 5.5 horsepower 2 stroke motor.

Honda was third Japanese company to produce an outboard motor with their 1964 GB-30, a 4 horsepower 4 stroke motor. Honda has pioneered the development and production of 4-stroke outboard engines and Honda boat propellers with a low impact on the environment based on the philosophy of their founder, Soichiro Honda, that “Watercraft should not pollute the waters they ply”.

Suzuki is the oldest of the four Japanese companies. Started in 1909 as a loom manufacturer. They began making outboard engines in 1965 when they introduced their D-55 model that was a 5.5 horsepower 2 stroke motor.
There is not much information on any of these early engines for some reason outside of the first ones produced. And practically nothing about the boat props they put on them.