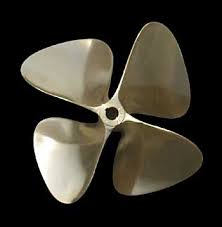 OJ Props produce inboard boat propellers for various boats. They have been around for almost eighty years since starting out in 1936 by it’s founder Oscar Johnson along with his son Ivar. They make the highest quality and performance boat props you can buy for your up to about twenty five foot inboard ski or pleasure boat. These props are made out of a combination of nickel, bronze and aluminum that is commonly called Nibral. They are stronger than the old bronze or brass propellers.

The Force four blade has the same basic blade design of the Legend three blade and was the first four blade propeller used in waterski tournaments around the world for better pulling power over the three bladed props used on the tow boats.

The XMP Edge three and four blade boat props are newer props that are the first boat propellers designed to be used specifically on wakeboard boats for pulling wakeboarders and surfers. They offer the exceptional performance for this kind of use that other brands in the industry cannot match . They have larger diameters and lower pitch options.

The XMP Wakeboard is the new and improved version of the XMP Edge four blade that has a little better speed and pulling power.
You can buy these inboard propellers along with boat props for most boats at the best prices here at Dan’s Discount Propellers.

Dan’s Discount Propellers sells boat propellers for all modern engines and boats at super discount prices. You can order propellers online or by phone . 1-800-573-5533