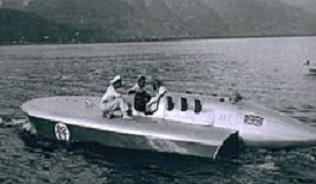 Malcolm Campbell From England beat Wood’s 1932 124.86 mph.record five years later on September 1 1937 with a speed of 126.32 mph. in his Blue Bird K3 boat that had a step hull, single engine and boat propeller. He increased the record the next day to 129.50 mph. His boat was only twenty three feet long compared to Wood’s huge thirty eight foot four engine Miss America X boat.

Malcolm Campbell was already world famous before this for having set the land speed record nine times between 1924 and 1935. His last record was the first time a car and driver went faster than 300 mph. with a speed of 301.337 mph. After that he retired from land record breaking attemps. He then started to concentrate on the water speed record. After his first record holding venture he decided to use a hydroplane style hull boat for his next attempts. This hull resign eliminates a lot of drag in the water because the boat skips on top of the water on only three small contact points, two floats in the front and just the back end of a center hull at the back the boat. The down side to this design is that it can be become very unstable at higher speeds with a tendency to either to become airborne if too much air gets underneath the front end or it could also nose dive into the water if the boat starts bouncing back to front. With his new style hydroplane boat the Blue Bird K4 he set his last record of 141.74mph. on August 19 1939. This record stood until 1950.